10 Things to Do in January

Happy January, guys! We hope your 2013 is going fantastically thus far. Here's our list of 10 suggestions for the month - hope you enjoy :-)

Embrace 2013 with gusto by braving the elements, whether you go for a bracing Polar Bear Swim or a cobweb-clearing winter walk.

Yes, it's a cliche, but there is something so satisfying about starting off the New Year afresh with a batch of resolutions. (And, even if you've already fallen off the wagon, you can always "re-start" them on Chinese New Year in February ;-)

There's nothing so depressing as seeing remnants of Christmas well into January, so make sure that every last strand of tinsel and chocolate santa is well and truly gone so you can move on with 2013.

4. Clean Out Your Fridge

On a similar note, now's the time to thoroughly clean out your fridge and toss out anything with a 2012 expiry date (because eating food that went off last year sure ain't good).

January is apparently National Hobby Month, so why not try your hand at something you've always had an interest in? Now's the time! 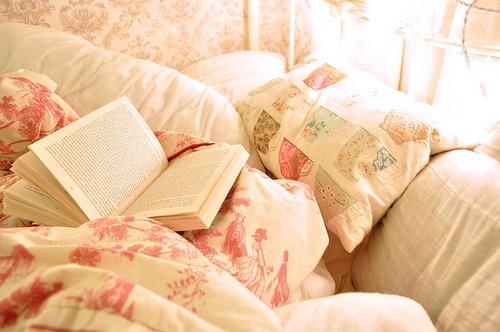 Whether you have a legitimate reason (ie. the flu!) or not, everyone deserves a Duvet Day at some point in January. A Duvet Day, for the uninitiated, is a day in which you pretty much stay in bed all day, armed with a stack of books, magazines, DVDs, snacks, etc, etc. The perfect way to while away a dreary winter's day!

Sunday the 13th was the 70th Annual Golden Globe Awards; we hope you enjoyed the 3+ hours of escapism!

Tune in to see Obama's second inauguration on the 21st - those Americans sure know how to put on a show!

Were you aware that there's such a thing as National Compliment Day, and that this year it's celebrated on the 24th of January? Nope, neither were we til now, but it's a holiday we can get behind. Brighten your day and others' by dishing out compliments to all you meet.

Why the hell not?! Even if, like us, you have absolutely zero connection with the Land Down Under, you can still pay a subtle nod to the day (26th January) by watching Summer Heights High...or listening to Kylie Minogue...or eating a Vegemite sandwich. You get the idea!
Posted by Ali and Vicky at 11:07 PM 6 comments:

An unspoken rule of mine (actually, scratch that, I'm pretty vocal about it), is that I have to wear something sparkly for New Years. I know, I know, it's not exactly a unique notion, but it's one I adhere to quite devotedly. However, after wearing the same glittery black-and-silver leopard-print top (it sounds so much more gruesome than it was...I think/hope) since the mid-noughties, I decided I needed to change things up a wee bit, and felt that NYE was the perfect occasion for my new sequinned collar shirt to make its debut. Since black and navy makes for a rather subdued palette, I livened things up with my new favourite lipstick - a punchy coral - and a pair of old M&S shoes that had been gathering dust in the back of my wardrobe. 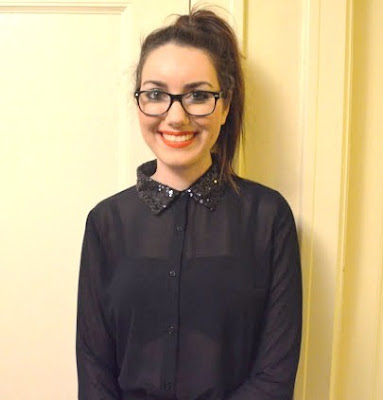 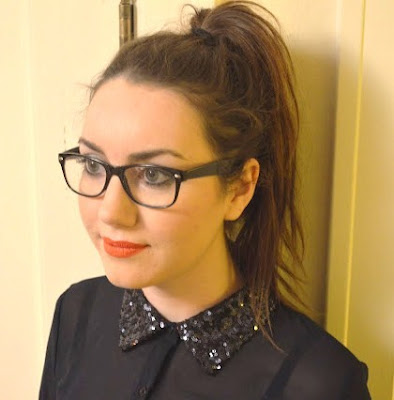 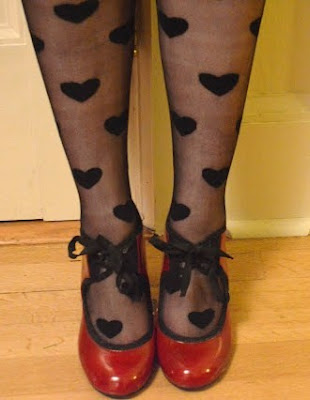 Although we've sung the praises of the LWD here, and provided winter-appropriate alternatives to the LBD here, sometimes you just can't beat the timeless elegance of a chic black dress. Vicky dressed up her look by adding heels, silvery jewellery, and sparkly black nails, but toned it down with a tousled updo and peach lips; the perfect balance for a casual New Year's look. 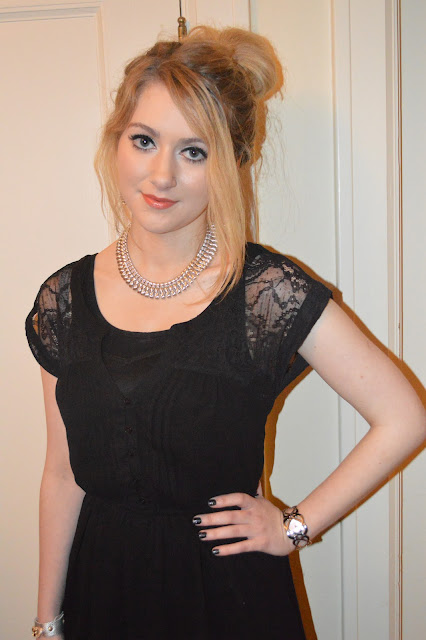 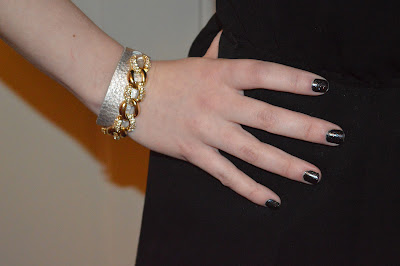 We love Awards Season for the dose of glitz and glamour it brings to our dreary, sun-starved January selves, and picking our favourite looks from the Golden Globes and Oscar nights is an annual pastime we really look forward to. Last night's event was somewhat disappointing in the style stakes, however. While we unanimously loved Jessica Alba's peachy ensemble, we didn't have such an easy task agreeing on four other favourites to round out our Top Five. Vicky and Claudia loved Nicole Richie's powder blue number, while Ali thought the whole look was a bit too Aladdin-esque; Ali thought Zooey Deschanel looked good, while V & C found her boring.

Then there were the dresses that nearly had it right except for some dodgy tailoring: Jennifer Lawrence in poppy-coloured Dior, and Jessica Chastain and Rosario Dawson in icy-blue gowns chose the perfect colour but were let down by the terrible fit. Also in the "bland" category were dresses that were, actually, just that - blaaaaaand! - including Julianne Moore's structured black-and-white number and Adele's black dress that we swear we've seen her in at every public appearance she's ever made. Ever.

Lastly (and by far the easiest category to agree upon) are our Worst Looks, or to put it more gently, our Least Favourites: the poor dresses characterised by an unfortunate combination of hideous colour/print/tailoring.

We hope you enjoy checking out our picks, and we'd love to hear your thoughts on the night's fashion hits and misses!

Well, we're already a third of the way into January, and the Christmas decs have been taken down, the resolutions have fallen to the wayside, and the temperatures have been dropping (and there's even a potential of snow!) This is definitely the dreariest time of year, but that's no reason why your style should suffer. Indulge in some retail therapy, or shop your own closet, for these ten winter must-have items we've compiled - enjoy!

1. A Fabulous Coat: An amazing coat not only hides a multitude of sartorial sins but also keeps the chill at bay. Win Win!!
Twist Tango coat - nelly.com

2. A Cosy Hat: Hats are both functional and statement-making: go all out with something big and bright or play it safe with one in a neutral colour that will go with all your coats.
Inverni cashmere beret - monnierfreres.co.uk

3. A Bit of Bling: Diamond-y jewels somehow seem most appropriate in winter - maybe because they resemble glistening snowflakes? Whatever the reason, they are an invaluable way of adding a little glamour to your winter apparel - pin a cluster of dazzling brooches to your coat for a cool look, or just the one if you're feeling more staid.
Brooch - jewelry.1stdibs.com

4. A Fur Gilet: An instant glamourizer and the perfect layering piece, a fur gilet is a fabulous addition to any wintery ensemble.
French Connection Faux Fur Gilet, Cream - johnlewis.com

5. Some Brocade Trousers: Fancy pants are everywhere, and they look oh-so-chic. Tone them down with a plain black top, or be more daring by pairing with a clashing print.

6. Some Snuggly Mittens: Keep your hands toasty and warm with a pair of cute mittens, like these cheery Fair Isle ones.
Jack wills - jackwills.com

7. An Over-Sized Jumper: When the weather outside is frightful, snuggle up inside the house in a big sweater worn over leggings (the kitschier/naffer/tackier the design, the better! Although this little Fair-Isle-Reindeer number is cool enough to be worn outside ;-)
Vintage sweater - sheinside.com

8. A Touch of Sparkle: Brighten up a gloomy winter day with some sequin action, whether it's in the form of a skirt or top. As long as the rest of your outfit is subdued, you'll be able to get away with it as day-wear.
Rare London short skirt - rarelondon.com

9. A Velvet Blazer: For a more wintery twist on the classic blazer, look for one in a luxuriant velvet; it's just as versatile but a bit more interesting.
Dolce Gabbana dolce gabbana - farfetch.com

10. A Pair of Toasty Snow-Boots: If you live in a place that gets a lot of snow (in which case Vicky is immensely jealous of you), you'll need some trusty boots for tramping around in. These Sorel beauties are both chic and practical.
Sorel waterproof boots - jades24.com
Posted by Ali and Vicky at 12:00 AM 1 comment:

Happy New Year, everyone!!! We hope you had a fantastic one, and we also hope that you managed to score some seriously good deals in the Boxing Week Sales ;-) Lots of shops are still clearing out their stock to make way for Spring arrivals, so take advantage of these ongoing sales and have a look at all the amazing party dresses currently at cut-price. While the Christmas/New Year's party season is over, it's still acceptable to wear winter-appropriate fabrics like velvet, plaid, fair isle and sequins (which lose much of their appeal once the weather starts getting warmer), so we hope you enjoy our round-up of Ten Winter Party Dresses!

1. Peplum: This trendy look is simple yet strong, and is the perfect backdrop for your most stunning statement necklace!
Dorothy Perkins fitted dress - dorothyperkins.com

5. Sequins: NYE is the time for all that sparkles and shines, so ring in the New Year in a glitzy little dress which does not hold back on the blingage.
Going out dress - desireclothing.co.uk

6. Flapper: Channel a Daisy Buchanan vibe with a fabulous '20s-inspired dress like this one (which begs to be worn with t-strap heels!)
Biba sequin party dress - houseoffraser.co.uk

7. Velvet: Velvet really comes into its own in the winter months, so take advantage of the chillier weather to deck yourself out in a luxuriant dress in a rich colour.
Adrianna Papell prom dress - johnlewis.com

8. Lace: Black, lace, body-con: the hallmarks of a classic go-to dress that you'll get guaranteed mileage out of.
River Island black dress - riverisland.com

9. Chiffon: A cute, flirty dress that would look fabulous with a pair of heeled Mary-Janes.
Madewell full skirt dress - madewell.com

10. Maxi: Go for a regal look with a sleek updo and an elegant maxi dress in a bold jewel tone.
J Crew strapless dress - net-a-porter.com
Posted by Ali and Vicky at 10:33 PM No comments: