Last May, Vicky and I, along with our friend Becky, went on a 3-week trip around Europe. We took in the sights, ate all around us, people-watched to our hearts' content, and generally had a fantastic time. None of us kept a journal during the trip itself (although I did make a few scattered notes here and there), so we've decided to recount our adventures here on the blog every Thursday, focusing on one city (in random order) per week. The minutiae of it may be a little bit boring (we're fond of noting what we had to eat in each place!) so apologies in advance...it's more a way for us to keep our memories alive than a super-informative guide, but we hope you enjoy it nonetheless!

While we had been to some of our ports-of-call before (ie. Paris, Rome, and Florence), there were others that were uncharted territory for all of us, and one such city was Ljubljana, the capital of Slovenia. None of us had ever been to Eastern Europe before, and my own experience of this little Slavic city was limited to its once having been on a spelling test of the capitals of Europe I had in 6th class when I lived in Ireland. The teacher, bless her, pronounced it "el-jub-el-jana" but I have since learned that it's actually more like "loob-yana" to the locals, and the country in which it lies is "slo-ven-ia" and not "slo-vay-nia" (as I'd been calling it) or "slo-vee-nia" (which had been Vicky's guess).

We arrived in the city on a stormy afternoon, with ominous grey clouds looming over the red-roofed buildings, which lent the place a distinctive air of Gothic horror gloom. (Although the below picture just so happens to capture the small patch of blue sky that was getting darker and darker by the minute). 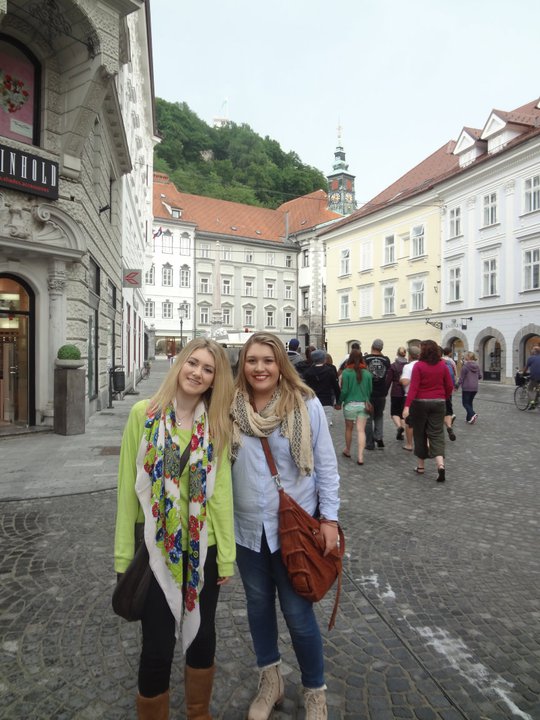 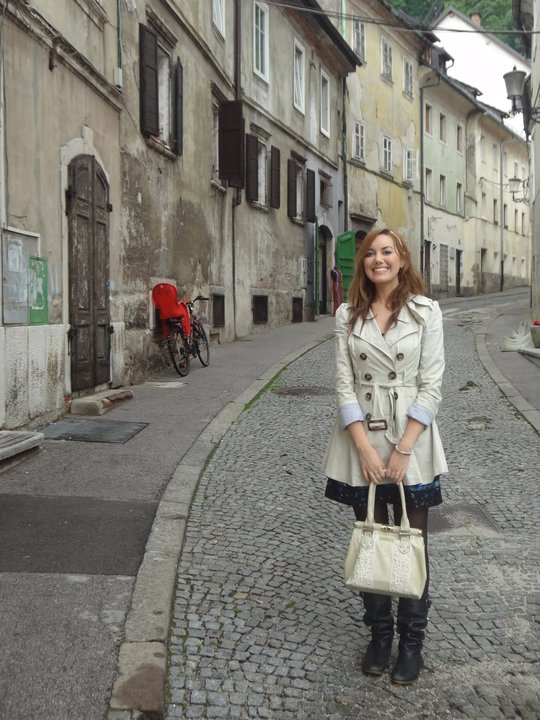 In keeping with our custom of feeding ourselves first before taking in anything remotely cultural in a new city (in a bid to prevent any hangriness* which may arise) we roamed the cobbled streets in search of a suitable cafe. We finally settled on a clean little bakery with lilac walls and light wooden tables, where we feasted upon croissants fresh from the oven and the most lovingly-served cappuccino ever (for a mere euro something, it came served on a neat little tray accompanied by a glass of water and square of chocolate. So thoughtful). Sadly we don't have any pictures to document this pit-stop but here's one of Vicky and Becky later on in the day at a particularly nice McCafe, at which we indulged in mochas with elaborately drizzled chocolate syrup and beautiful pastries you could have sworn came from an exclusive patisserie. 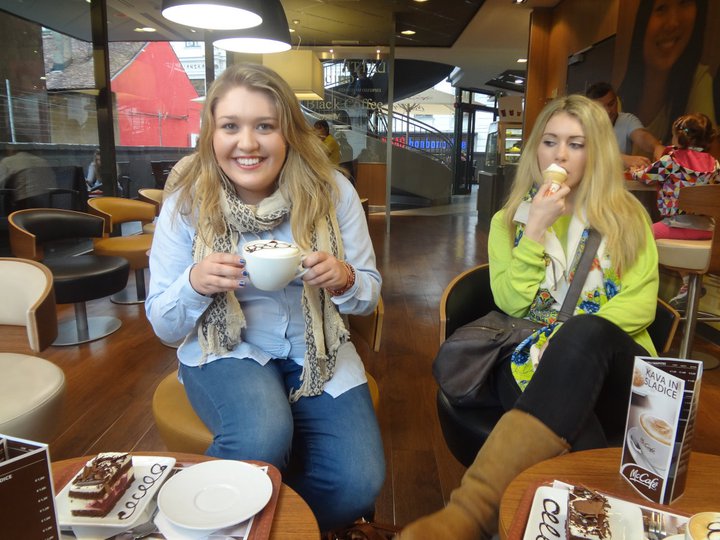 But don't worry, we also did other (less gluttonous) things in Ljubljana. We visited the city's main attraction, its hilltop castle - a rather foreboding 9th century meets the '70s fortress, which was a tad soulless and bizarrely devoid of any sort of furnishing. 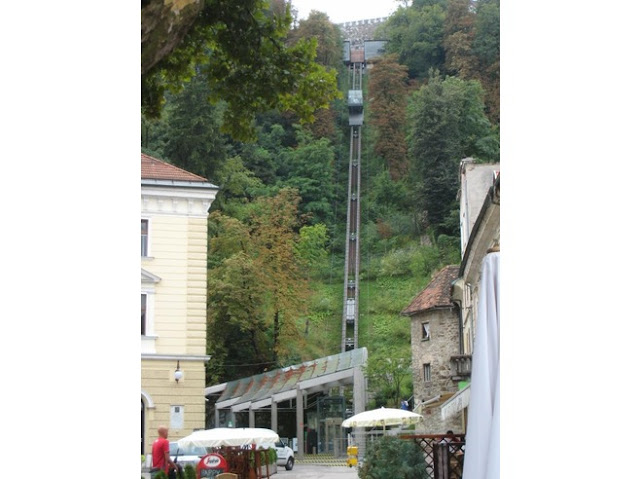 {Funicular railway up to the castle} 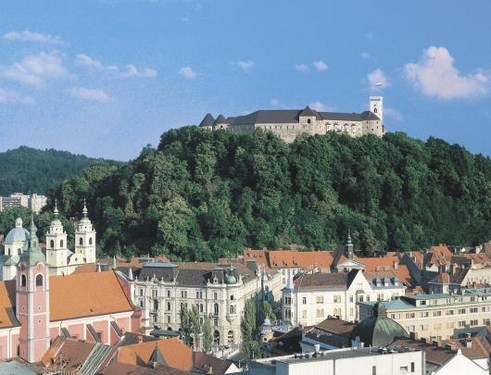 {Ljubljana Castle on a sunny day - something we didn't experience, personally} 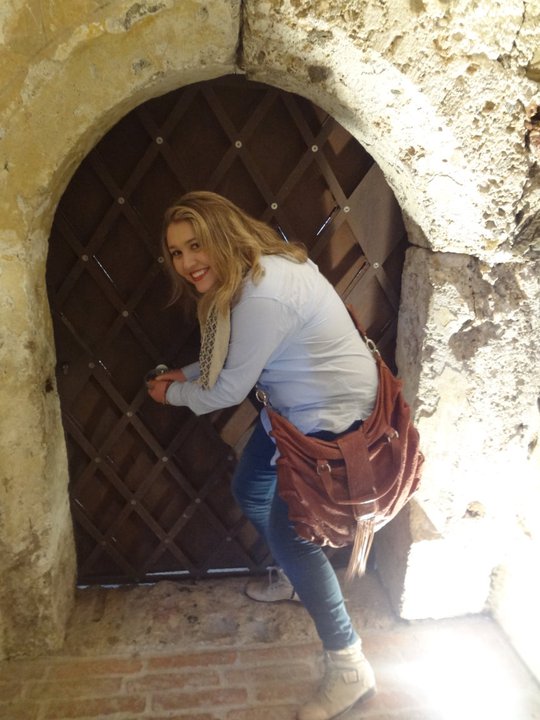 {The castle was full of intriguing little doors like this one} 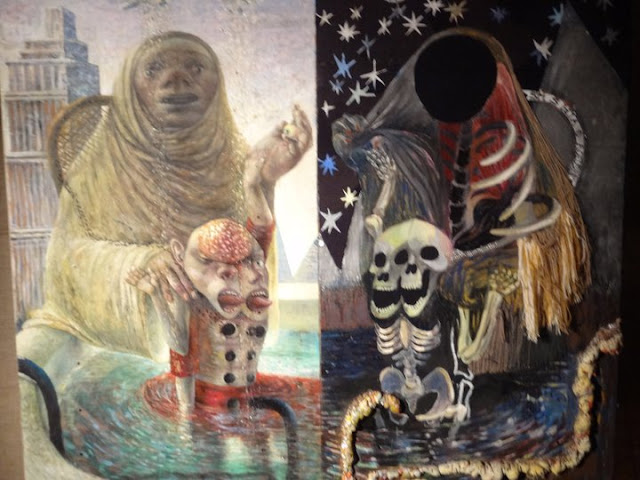 {There was an art gallery of sorts in the castle full of this nightmarish stuff - eeeeek!!} 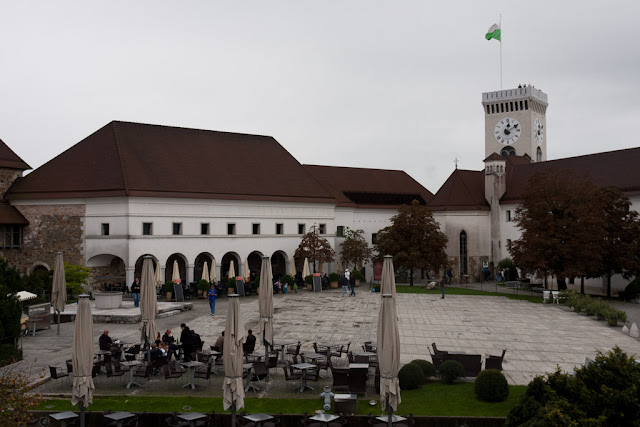 {The castle courtyard - a rather grim place}
Ljubljana is a fairly small, compact city (at just over 250, 000 people, it's one of the smallest capitals in Europe); just the right size to explore in a day. Apart from the castle, there were other buildings and monuments of note dotted throughout the town centre which we had a look at. 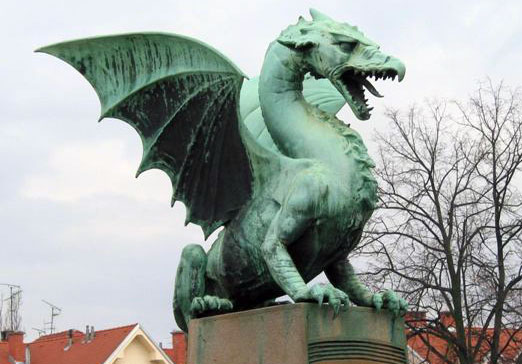 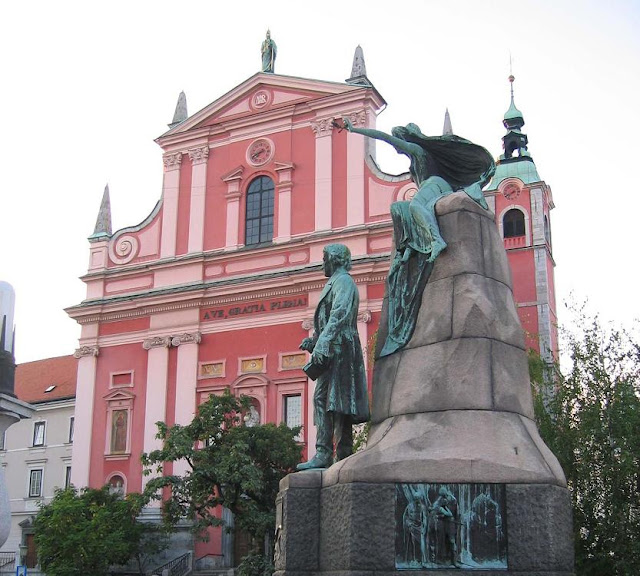 {The 17th-century Frančiškanska cerkev, aka Franciscan Church, and Prešeren Monument} 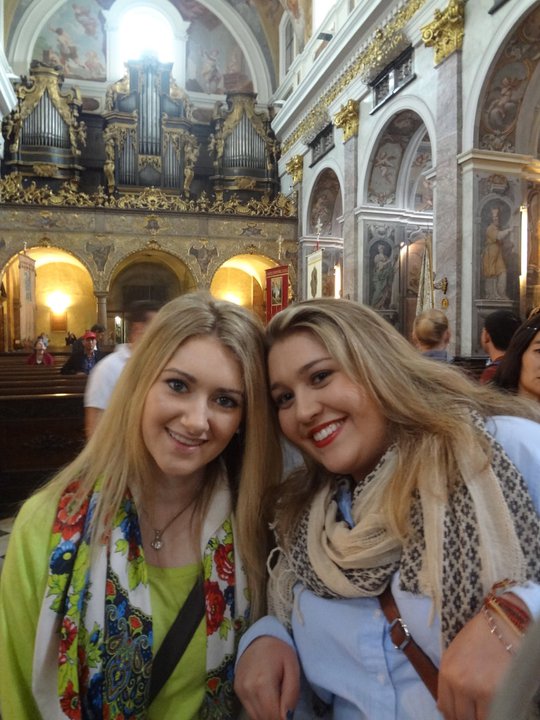 {Vicky and Becky inside the (super-ornate) church 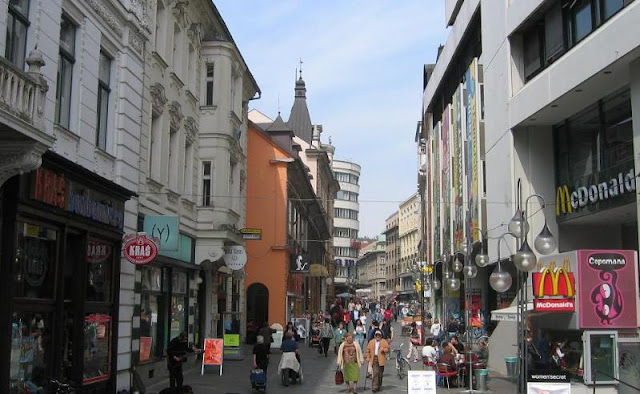 Once we'd covered a respectable amount of historical things, we felt that a different form of cultural exploration was necessary - checking out the shops! Whenever possible, we love having a look at the high street shops (H&M, Zara, etc.) in a new city/country; not necessarily to buy anything, but just to get a better feel for what everyday life is like for people our age, away from the touristy spots. (We apply this logic to our predilection for McDonalds in every city, too...but seriously, it's really interesting how each country has a slight variation of the menu, and plus, it's always a safe bet for when you just don't fancy a horse steak or liver sausage for dinner). Wandering the streets of Ljubljana, we made a few interesting (to us, anyway) observations - that the Slovenes tend to be super tall (I'm 5'9 and for the first time ever I felt average height), and that the city has lots of bookshops, many with a surprisingly large selection of English books, compared to other European cities. The people, for the most part, were somewhat reserved but very polite and sweet, and, as previously noted, the service in cafes was impeccable.
It would have been nice to see the city on a sunnier day, as the stormy weather sort of enhanced the sliiiightly oppressive vibe going on. Maybe one day we'll be back!